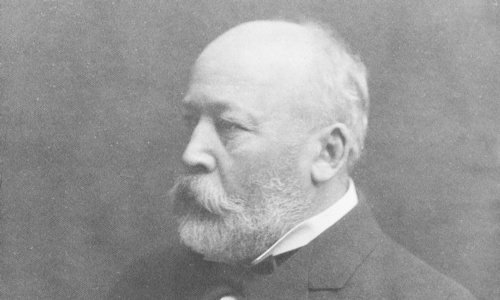 The president of Canadian Pacific Railway (CPR), William Van Horne, envisioned a string of grand hotels across Canada that would draw travellers from abroad to use the railway. The opening of Hotel Vancouver by CPR in 1888 was the beginning of railway empires developing and operating large hotels in Canada. 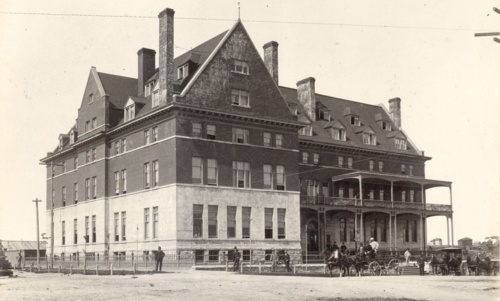 Designed by architect Thomas Sorby, the hotel opened on May 16, 1888. The original structure was located at the corner of Georgia and Granville. The design was very simple, and was often compared to a farmhouse, featuring six storeys and 80 guest rooms. 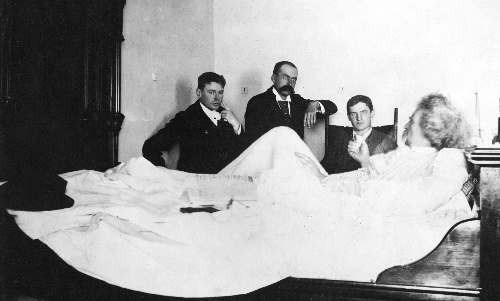 Though he was feeling under-the-weather, Mark Twain still met with reporters from his bed in Hotel Vancouver to promote his global lecture tour. 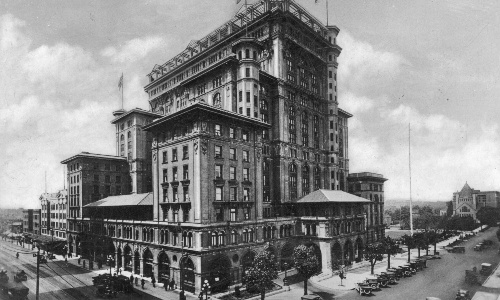 After three expansions to the first Hotel Vancouver structure, plans were approved in 1913 for a new 15 storey Hotel Vancouver. Designed by CPR architect Francis Swales, it was nothing short of stunning, featuring 521 guest rooms, multiple restaurants, ballrooms, and a rooftop garden. The official completion date was July 16, 1916. 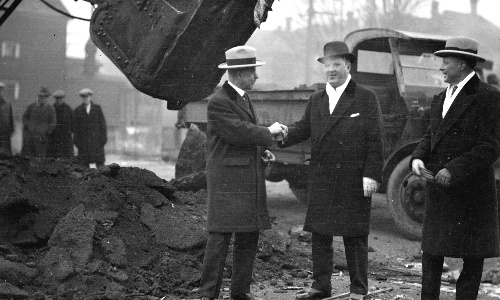 1928 Construction Begins on Our Hotel

In 1928, Canadian National Railway (CNR) announced their plans to construct a new hotel at Georgia and Hornby, only one block from CPR’s Hotel Vancouver. On December 4, 1928, they broke ground and construction began on one of the largest building projects ever undertaken in Vancouver history. 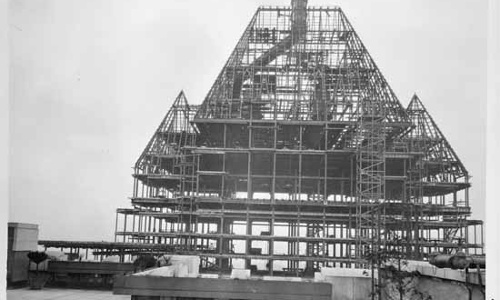 The Great Depression brings progress on the hotel to a near standstill for five years. In that time, problems were arising with the construction quality of the second Hotel Vancouver and the fixes would be costly. 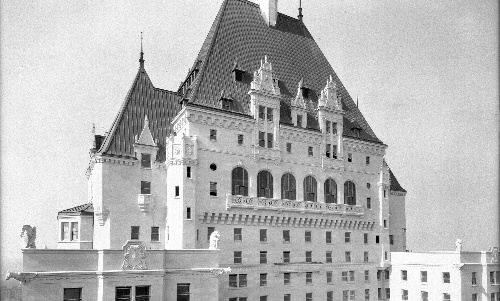 Work resumes on the hotel, and it’s announced that CNR and CPR will be running the new hotel together. 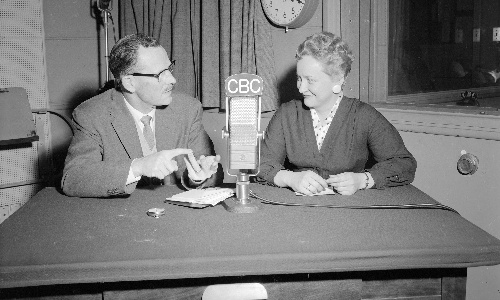 The height of the hotel (365 ft) made it the perfect location for CBC to broadcast from, moving in long before the hotel had even opened. They had a studio on the 17th floor as well as in the lobby until 1975. 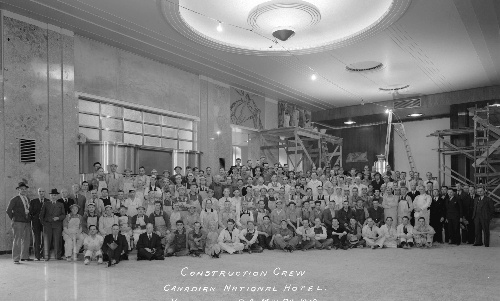 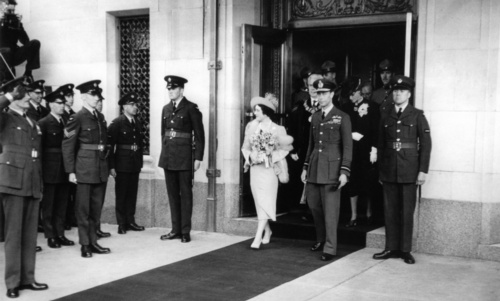 May 29 - Officially Opened by Royals

The hotel was officially opened by King George VI and Queen Elizabeth on May 29, during their Royal Tour of Canada. The Fourteenth Floor had been specially designed just for their stay. They also enjoyed a civic lunch in the ballroom during their visit. 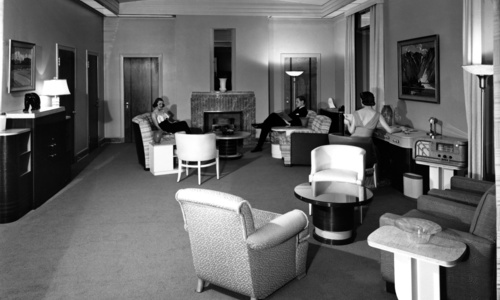 The Fourteenth Floor of the hotel was specifically designed and decorated as one large suite for the King and Queen, with both a feminine and masculine side. The floor was finished with exotic woods, solid bronze doors, accents and doorplates, which still exist to this day. 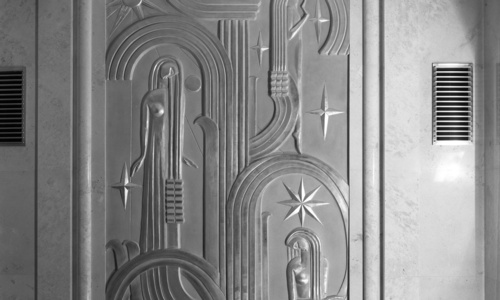 The hotel hired three female artists to contribute to the interior design. Beatrice Lennie, a sculptress, created the panel in the elevator lobby pictured above, and the Fourteenth Floor mouldings. Lilias Farley painted two large murals for the women’s tavern, and Olea Davis did the modelling for much of the metal work, including grills and lighting fixtures. 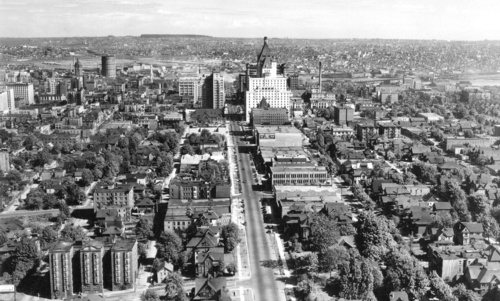 Hotel Vancouver stands at 365 feet, one foot for each day of the year, and could be seen from 50 miles away at the time. It held the title of the tallest building in Vancouver until 1972 when it was surpassed by the TD Tower. 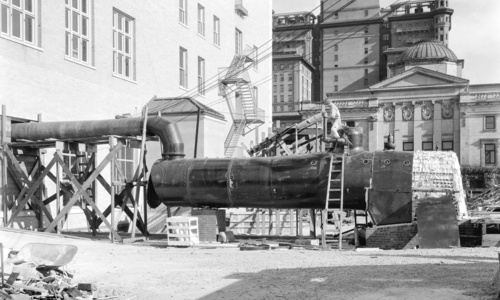 Three miles of tubes and 150,000 bricks were used to install the hotel’s powerful boilers that weigh in at 300 tons (and still reside in hotel’s sub-basement to this day). The boilers were able to generate enough steam to supply the entire hotel and surrounding buildings with energy. 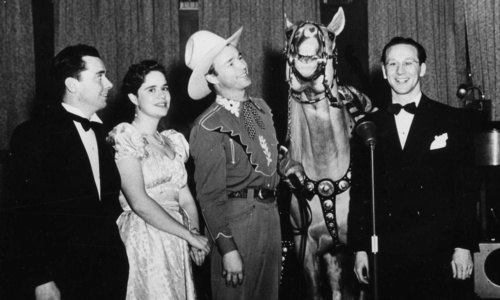 Dal Richards was an institution at the hotel’s Panorama Roof Ballroom on the 15th floor. The Dal Richards Orchestra played five nights a week for 25 years, with a live CBC radio broadcast every Saturday evening. He had a large fan following, including celebrities, who would come to hear his music. 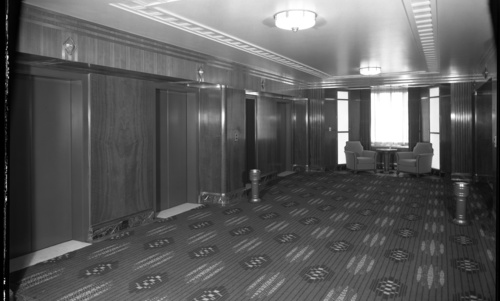 In the summer of 1944, Jennie Pearl Cox, a socialite who regularly attended tea dances and luxurious events at Hotel Vancouver, was killed in a tragic car accident after colliding with a truck at the intersection. Since then, there have been numerous sightings from staff and guests of a lady in a red dress that seemingly disappears in front of them, passing through walls and closed elevator doors. 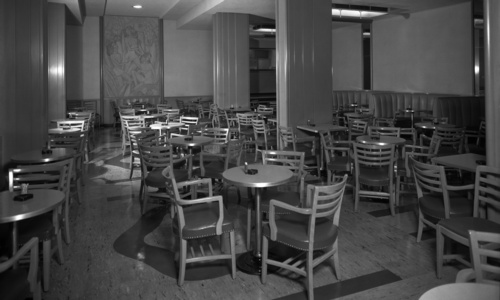 Through the 1950’s, Vancouver required that taverns be segregated with a four ft. high wall separating male and female patrons. The men’s side of Hotel Vancouver’s beer parlour became known in the LGBTQ community as a safe space to meet others. 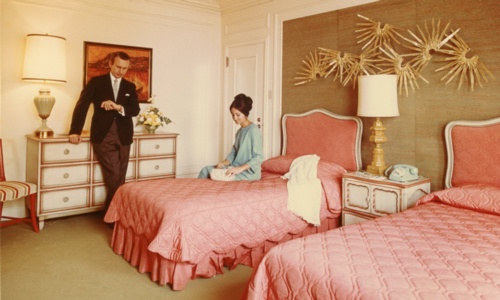 Wanting to ‘keep up with the times’, the hotel underwent a multi-million dollar renovation project to modernize for then-current tastes. Much of the original art, furniture and Art Deco finishings were removed and either sold or discarded, their value not understood until decades later. 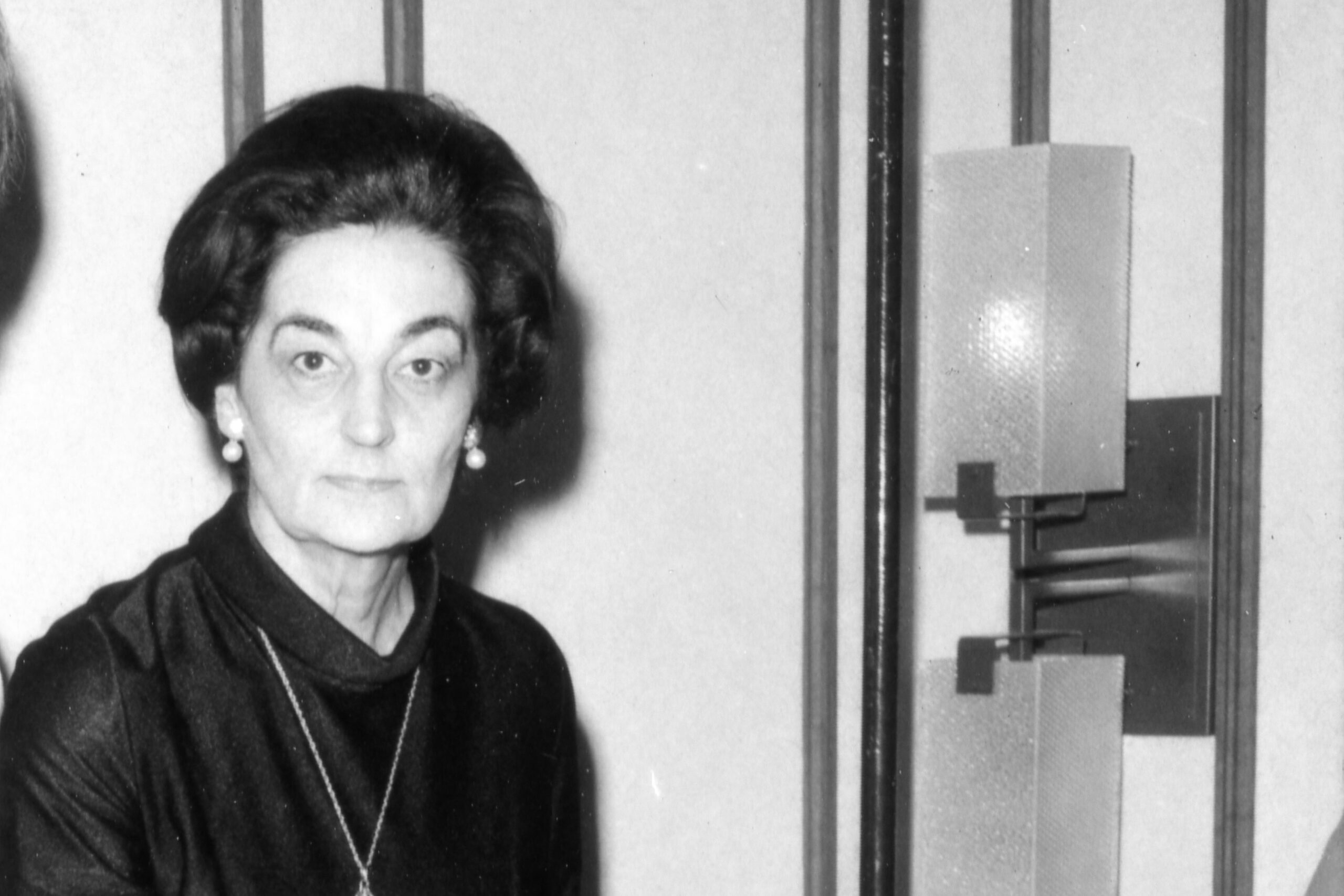 Housekeeper Ethel Ferguson, a no-nonsense woman with 20 years of service, was horrified at the idea of selling off the Chippendale and mahogany furnishings so she carefully hid over 200 pieces. More than 15 years later when a restoration returned the hotel to its original style, Ethel, reassured that it would be to her liking, produced enough original furniture to decorate 35 rooms and then contentedly retired as Director of Housekeeping in 1986. 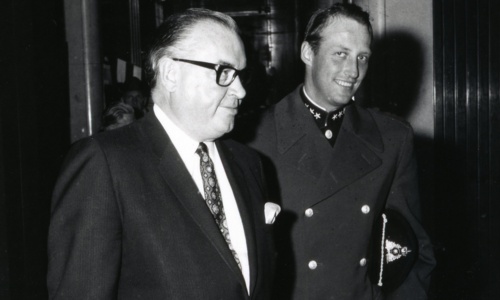 Art Cameron, the hotel’s resident GM for many years, had an unorthodox wit that was legendary among staff and guests. One of his favourite tricks was to telephone staff and imitate voices of important guests who were visiting at the time. On one occasion this prank backfired. The Crown Prince of Norway arrived for a visit and phoned the news stand to inquire about foreign language papers. The clerk replied, “Don’t bother us now Mr. Cameron, we’re busy!” and hung up on him. 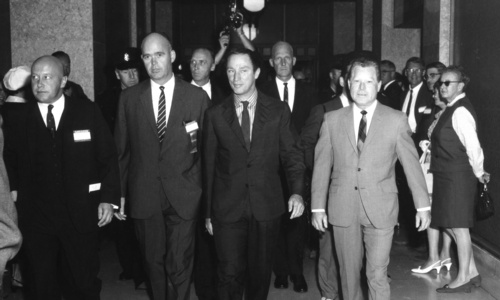 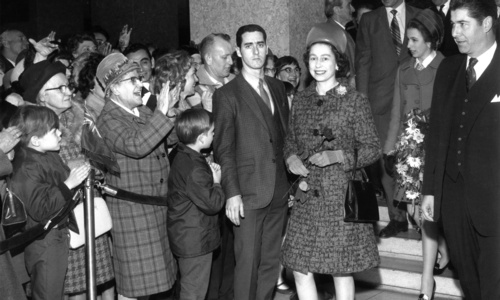 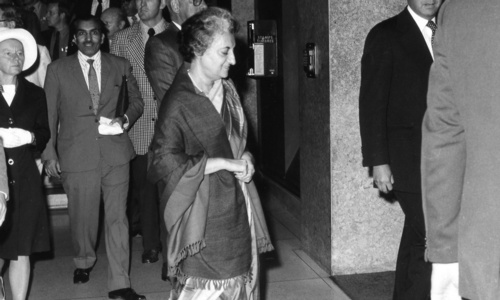 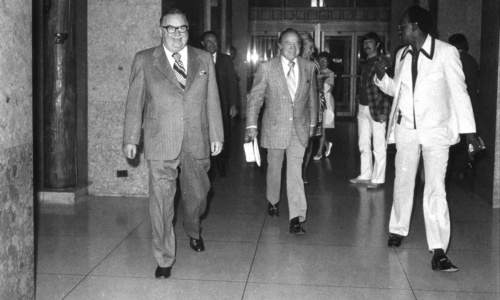 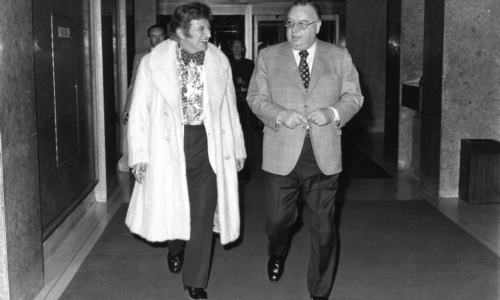 A Concierge in Your Pocket
Unlimted access to the world on Fairmont wherever you go.
Download the App